Laser lipolysis is an advanced, FDA-approved cosmetic procedure used to remove fatty tissue from localized areas of the body, and to contour those areas by tightening the affected skin. Designed specifically to target fat in parts of the body resistant to diet and exercise, lipolysis is a minimally invasive procedure, and represents a technological advance over liposuction, the original treatment for removal of localized fat.

Although effective, liposuction is an invasive procedure that requires a lengthy recovery time. Laser lipolysis, on the other hand, offers effective results with minimal downtime. Just as there are several types of liposuction, there are several types of laser lipolysis. All are derived from conventional liposuction, during which unwanted fatty tissue is suctioned out of the body through small tubes called cannulas. In laser lipolysis, laser energy melts the fatty tissue before its removal, and smaller cannulas, which cause less tissue trauma, are used.

Laser lipolysis, when performed as an isolated procedure, treats only small areas of the body. It is sometimes referred to as "lunchtime lipo" because it takes only an hour or two to produce effective results. When a more significant reduction of fatty tissue is required, laser lipolysis is often performed along with traditional liposuction, helping patients to achieve maximum results in just one treatment.

After treatment, a patient can expect significant circumferential reduction and skin-tightening in the targeted area. Common areas treated with laser lipolysis include the waist, abdomen, back, hips, buttocks, knees, ankles, face and neck.

Laser lipolysis has a number of benefits over traditional liposuction. They include:

The laser lipolysis procedure works along the same lines as the conventional liposuction procedure, except that it uses laser technology. Laser energy heats the fat cells, liquefying them and making them easy to remove through the smaller cannulas. This significantly reduces the trauma of the procedure. The laser also improves the treatment-area skin, causing it to tighten and conform to the body's new contours. Conventional liposuction often leaves skin loose and hanging.

When performed on its own, laser lipolysis requires only local anesthesia, and is generally well tolerated. Depending on the size of the area treated, the procedure can last from less than an hour to several hours. Because the incision is small, no sutures are needed, and scarring is minimal. In some cases, scarring is not visible at all. A patient can return home shortly after treatment.

Although laser lipolysis is considered safe, it is not appropriate for patients who are pregnant or regularly take certain medications. Because of the minimally invasive nature of the treatment, there is a lower risk of side effects, which include bruising, soreness, bleeding and swelling, than with conventional liposuction. Small lumps may be palpable at the treatment site, but will disappear in a short time. More serious complications are rare, but may include nausea, vomiting, fever, infection or prolonged bruising. If these symptoms are present, immediate medical intervention is required.

After laser lipolysis, patients can often return to work and other regular activities the next day. The positive effects of the procedure are immediately apparent, and the treated area, as it heals, continues to improve for several months. As with conventional liposuction, results of laser lipolysis are considered permanent unless a significant amount of weight is gained after treatment. 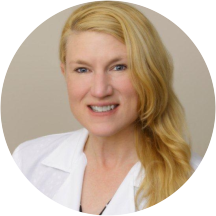 Dr. Spears, MD is a plastic surgeon with significant teaching experience. She is certified by the American Board of Plastic Surgery. In 1987, Dr. Spears completed her Bachelor of Science and gradua

Schedule a virtual consultation with
Dr. Spears
Telemedicine by
Doxy.me